My 2019 new year’s resolution is to do a “land acknowledgment” for every place I stay during the year. I’m starting with my home in Davis.

Land acknowledgments began recently with First Nations in Canada and are simply a public recognition of the history of the land. They are becoming regular at Canadian universities to open any kind of public meeting. To quote Kelly Benning, Indigenous Initiatives Coordinator at Grande Prairie Regional College in Alberta, “More and more, people are starting to do land acknowledgements whenever they do any kind of public event…. It’s just an opportunity for all people to recognize the Indigenous lands that they are standing on.”

My street. I’ll try to post a sunset pic for every land acknowledgment. The structures on the land may change over time, but the sky doesn’t. This sunset would have been just as likely in 1819 as 2019.

For centuries, Putah Creek was Patwin country. Specifically, Southern Patwin, a band of the Wintun ethnic group. They had many villages, some with over 400 people, from Suisun Marsh to the Sacramento River. Yolo, as in Yolo County, is a Patwin word for rushes or grass.

And now for a deeper dive into how exactly I came to hold a title to a house on Patwin land. For the Patwin, everything changed dramatically in a span of less than 30 years, starting in 1821.

Spain claimed California in 1769, but didn’t even visit this area until 1821, the same year Mexico gained independence and took over California. Within five years, the Patwin villages were visited by several fur trapping parties, including Jedediah Smith and two parties from Hudson’s Bay Company. One of them brought an epidemic, possibly malaria, that killed 20,000 Native Americans in the Central Valley, including a huge proportion of the Patwin in 1833. Their villages were abandoned and the survivors were taken to the missions, which were just being dissolved at the time. By the Gold Rush and the ensuing calls for Native extermination in California, the Patwin villages in the Davis area were already gone. 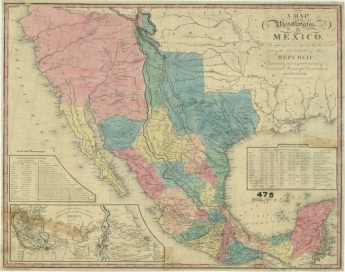 Mexico in 1832 (although the Comanche, Pueblo, and others would beg to differ).

The Spanish and Mexican governors granted thousands of square miles of Native land to politically connected individuals. As Mexican control waned during the Mexican-American War, they issued a flurry of land grants to the Mexican elite. Under terms of a treaty with the United States, these grants were honored as long as their boundaries and terms could be confirmed. That’s an important caveat– and white American courts used it as a way to take back the land from Mexicans. As California joined the United States, a land commission heard over 800 cases related to contested land grants. The average time to resolution was 17 years. White lawyers often ended up with a large chunk of the property in question.

Land grants were first issued using hand drawn maps and crude boundaries. The pink parcel, Rancho Laguna de Santo Calle, turned out to be fictitious; no Mexican governor ever created or granted it.

The Davis area was a prime example of this legal battle over formerly-Native lands. Davis fell within the so-called Rancho Laguna de Santo Calle. This land grant was supposedly issued to Marcos Vaca and Victor Prudon in 1848, at the eleventh hour just before California fell into American hands. The entire grant was later discovered to be fraudulent, but not before Vaca and Prudon sold the Davis portion to Joseph Chiles in 1850. He, in turn, gave the Davis portion to his son-in-law, Jerome Davis, who further subdivided the land, sold off portions to investors, and established the town, originally called Davisville.

So Davis is a land twice stolen. It was taken from the Patwin and then fraudulently claimed by two Mexicans who sold it to an American, who then subdivided it and passed it on. Meanwhile, a small town was forming on the contested land. The case became so confused that, in 1864, the US Congress actually passed a law called the “Act to quiet the Titles to Lands within the Rancho Laguna de Santos Calle, in the State of California”, that allowed the current “owners” (and there were dozens by then) to certify their properties, for $1.25/acre, and settle the ownership question once and for all. The legal challenges actually continued thru 1884, as the Davis area was also claimed by the owners of the nearby Rancho Los Putos (named for the Native word for the river, not the Spanish slang).

The area were I live, called the Senda Nueva development in north Davis, was owned by several real estate investors (one of whom still lives down the street) and wasn’t built until the early 1980s. My house was built in 1986; I think I’m the second owner.

It’s not clear what happened to the Patwin immediately after 1833. In 1850, when California became a state, the first act passed by the state legislature regulated– and legalized– Native child slavery. It’s likely some of the Patwin ended up as domestic servants or ranch hands, probably scattered around northern California. Some may have ended up at a veritable slave plantation run by the Bariessa family along upper Putah Creek (under today’s Lake Berryessa) in the 1850s. There, they would have been subject to a massive Native child sex trafficking enterprise.

In the late 1800s, the surviving Native Californians were eventually grouped with other tribes and sent to various reservations (called rancherias). That’s a long story in and of itself.

Today the nearest community of Patwin is the Yocha Dehe Wintun Nation (formerly called the Rumsey Indian Rancheria) in Capay Valley. They are dedicated to maintaining their culture and restoring their language. In an interesting twist of fate, the Yocha Dehe, thru their casino, has become one of the largest employers in Yolo County, second only to UC Davis. Thru their earnings, they fund two endowed chairs at UC Davis, which is located at the site of their former village along Putah Creek.