Navajo Nation now has one of the highest COVID rates in the world: May 3 update

COVID-19 cases in Navajo Nation continue to rise at high rates across in all regions. Both confirmed cases and deaths grew on average 6% per day over the last week, implying doubling of cases and deaths every 12 days. 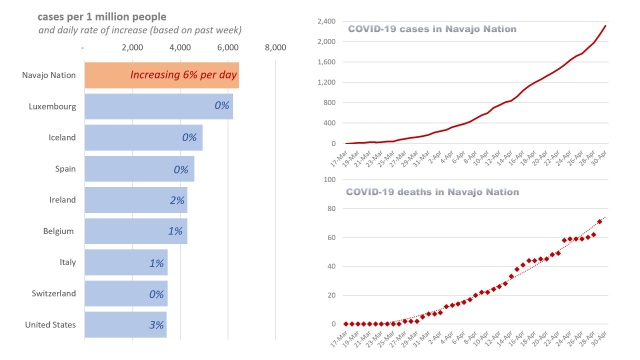 Given the population of Navajo Nation is 357,000, the rate of infection is now over 6,000 per million, which exceeds all nations in the world except for the small city states of San Marino, Andorra, and the Vatican. In the United States, New York and states near New York City, as well as the District of Columbia, have higher rates. New York’s infection rate is over 16,000 per million.  The rate of growth in all those other nations and states is zero to 3% per day. In New York, it is now 1% per day.

The Navajo Nation still awaits federal government support from the Coronavirus Aid, Relief, and Economic Security (CARES) Act, which passed Congress on March 27. $8 billion was allocated for tribes, but not a penny has been released, as the Treasury Department is still figuring out how to divide it among 500+ federally-recognized tribes. Suggestion: Release the first $2 billion now for immediate response, divided based upon number of confirmed cases. Release the next $2 billion for prevention, divided based upon total population at reservations or counties. Get it moving now. Figure out the rest later.

Like Loading...
This entry was posted in COVID-19 and tagged CARES Act, coronavirus, COVID-19, navajo. Bookmark the permalink.

1 Response to Navajo Nation now has one of the highest COVID rates in the world: May 3 update